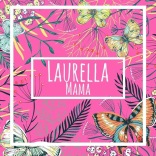 Laurella Mama is a clothing brand (established in 2017) that makes breastfeeding Mummies feel less frumpy, as the pieces are tested to the exacting standards of Boobie Monsters and their snack bars (aka the Mummies!)

Lauren has collected together functioning pieces of high street fashion that give breastfeeding Mummies the freedom of public feeding, whilst looking fabulous and helping maternity pay stretch further as every piece is £25 or under! No Mum Guilt here! You can treat yourself and feel like a #YummyMummy.

The brand empowers Mummies to remain fashionable through their breastfeeding journey. There is certainly a Laurella Mama Mafia because alongside the clothing there is a 4K strong network on the Facebook Page (as well as a Laurella Mama Village, VIP AND breastfeeding support group linked to the main page) and just over 1k and growing on Instagram. The mission statement is “Be a Fashionable Mama.”

There’s a collection of beautiful wrap tops,  button down dresses, knitwear & more that certainly abolish the “frumpy mum” label. Each item is modeled by a real life, breastfeeding Mummy and are stocked in sizes 8-24 to perfectly dress any postpartum body to its best! I am particularly loving the ponchos ready for AW18.

I jumped at the chance to Guest Blog for this supportive brand and network of Mummies, as there is also a collective of Mummy Bloggers who have offered such useful advice to both new and seasoned Mothers alike. I felt that my experience of premature birth may be a topic of interest as the eventuality is rarely discussed as part of your pregnancy support, but it happens. I feel the information gleamed from the study around which I based this piece should be more widely available to women planning their second child.

I was certainly not ready to be in the midst of active labour at 33 weeks! It is not the eventuality that is at the forefront of your mind as you are kept on a strict timetable of care and with apps that track your pregnancy such as Ovia, you are experiencing your pregnancy measured by an average; but some pregnancies are the exception to the rule!

“I think I am in labour” I determined at around 6.35pm on Tuesday 17th April 2018. It was a very peculiar experience and it almost felt “out of body” in nature as the waves of contractions ebbed and flowed. I calmly packed my Hospital Bag, as if it wasn’t actually happening to me (what I ended up packing actually turned out to be mostly useless- to this day I don’t know why I packed that miniature bottle of champagne!) and had my husband drive us to the hospital. My pregnancy has been fraught (I had faux contractions at 28 weeks and thought I was in labour then and just the day before my actual labour I had been monitored at the hospital for almost 8 hours due to reduced movements.) I had been in the office the afternoon of Bea’s birth day, having come back from the hospital that morning for a second set of observations because of the inconclusivity of the results from the previous day.

I had initially thought that I had a bad back, but as we journeyed to the hospital (oddly I was still super serene) I became acutely aware that this was now more than a bit of back pain. I was having contractions. I was having this baby tonight! I hadn’t even gotten to my midwife appointment to craft my birth plan. To be honest it’s probably worth throwing that away right now if you have one!!!

Bea was born at a robust 4lbs 8.5oz but had a few breathing issues (I was a lot further into labour than the staff had imagined when I made it to the hospital at 5cm dilated so I didn’t have enough time to be administered my second set of steroid injections!) I was lucky to spend about twenty minutes with Bea before she was rushed away to NICU to ensure that she was safe and well. (Read Bea’s full birth story here!)

An estimated 15 million babies are born prematurely worldwide each year and preterm birth complications are the leading cause of death among children under five years of age, responsible for nearly 1 million deaths annually.

I puzzled over why my story ended with an early labour. Why was it that my body had been incapable of carrying TWO babies to term now? Is there a scientific reason that can be found for the outcome of my two rather traumatic births (the first a loss/late miscarriage and the second a premature baby?)

It turns out that the British Journal of Obstetrics and Gynaecologists had published a study that could go some way towards answering my questions! In all honesty following my loss I was determined to conceive again and we began trying for a baby about 6 weeks after our loss (obviously this is not necessarily the right option for other couples that have lost a baby, but for myself if I had waited the fear of an outcome of loss would have prevented me from trying for a baby again!)

None of the healthcare professionals I had met with following the loss of our Son had even discussed the idea of an adequate birth spacing. Had I known that there seems to be a strong correlation with inadequate birth spacings and premature babies I would have reconsidered conceiving our little lady within 4 months! The crux of the matter of baby planning is that conceiving too soon following the birth of a baby (for the purposes of the study that also included the loss of a baby) or too late the chance of early labour increased. Why are we not being told this as part of our pregnancy care so that we are able to come to terms with the fact that our babies may come earlier than expected if we are not conceiving in a scientifically optimum timeframe?

The full study can be found here and certainly makes for an interesting read. The results showed that women who conceive less than six months after giving birth have a 70% higher risk of preterm birth than women with an optimal interpregnancy interval, while the risk for those with an interpregnancy interval of six to 11 months is 20% higher.

It turns out that an optimum birth spacing is 18-23 months with only 1 out of 17 births resulting in preterm labour. They classify inadequate birthing space as anything before 18 months or any time after 36 months. Who would have thought that how you space your pregnancies is a factor we should be considering more?! It is certainly not something I would have even considered in the run up to conceiving our Rainbow Baby! There is not immediate access to this information and I have only found this because my Baby was one of the 15 million babies born prematurely this year! Interestingly whilst I was in the Transitional Ward there was an influx of premature babies (the most that were born at the same time as noted by the Ward Staff.)

It boggles my mind that globally 225 million women do not have access to family planning support & services, so we should be thankful that our care is at a standard that protects Mothers!

The President Elect for the Royal College of Obstetricians and Gynaecologists (RCOG): Professor Lesley Regan says:

“Family planning is a key international priority that should not only be regarded as an intervention for improving health, but also as a human right,”

I strongly agree because providing  women across the world with the choice to use effective contraception and to space their babies by 24 months or more, would prevent 54 million unintended pregnancies, 79,000 maternal deaths and 1.1 million infant deaths.

The whole topic is now something I feel is important to share with Mothers near and far. We were discussing another child within the next 12 months, however I do not feel that I would be able to cope for a second time with the consequences of a premature baby (especially with our little Bea in tow now!) so I feel like I will take at least 18 months to enjoy my time with our little pocket sized blessing!

Have you given birth to premature babies with less than 18 months apart? Had you ever thought about Birth Spacing and with these results is it something you would now consider within your family plans?

If you enjoyed my piece do not hesitate to contact me for Guest Blogging opportunities.

Published by Bea & Me

One thought on “Guest Blog for Laurella Mama: Let’s Talk About “Birth Spacing”!”